Like an electric-powered system, natural gas engine-driven cooling systems use vapor compression equipment and a vapor compression cycle to cool and dehumidify building air.  In the gas system, however, an engine replaces the electric motor, allowing for variable-speed operating capability and greater efficiency when operating partial loads, a particularly important feature in air conditioning applications.  Efficiency is further enhanced by recovering waste heat from the engine jacket and exhaust gas to supply thermal energy for domestic hot water, steam generation and other applications, and reducing total energy needs. 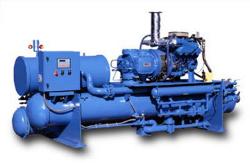 The engine-driven chiller cools a stream of chilled water and then sends it to individual air coils, which in turn, cool and dehumidify the air.  The chiller consists of four main components:  the compressor, condenser, expansion valve and evaporator.  The compressor raises the pressure of low-pressure refrigerant so that it then has a higher saturation temperature.  In the condenser, heat is removed from the high-pressure vapor and rejected to cooling water, allowing the vapor to condense to a liquid at the higher temperature.  The expansion valve reduces the pressure of the liquid refrigerant, which causes the saturation temperature to also reduce.  The evaporator supplies heat to the refrigerant from the chilled water.  This heat boils the refrigerant at the lower temperature and pressure.  Because heat is removed from the chilled water stream, the chilled water is cooled. 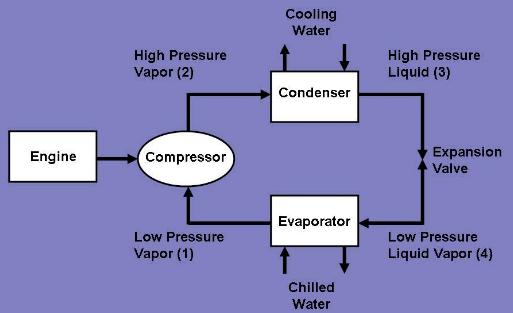